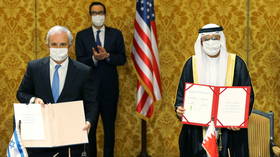 Bahrain has become the fourth Arab nation to formally establish diplomatic ties with Tel Aviv as officials from both states signed a joint communique on the issue during a visit by a high-level US-Israeli delegation to Manama.

The development comes after Bahrain and Israel struck a US-brokered deal on normalization of relations in Washington in mid-September. Now, Israeli Prime Minister Benjamin Netanyahu’s national security adviser, Meir Ben-Shabbat, and the US Treasury Secretary Steven Mnuchin flew to the Bahraini capital at the helm of a high-level joint delegation to finalize the issue.

“Today we made the first formal step in bringing closer ties between the countries,” Ben-Shabbat said, adding that the delegation was welcomed “with open arms, with warmth and cordiality.” Mnuchin called it “an important step in stability in the region” while Bahrain’s Foreign Minister Abdullatif al-Zayani praised the occasion as “a historic visit” that would help both nations to “have fruitful bilateral relations” in many fields.
Apart from the agreement itself, the sides also signed several memoranda of understanding, covering a number of fields ranging from trade and air services to telecommunications, finance, banking and agriculture.

Bahrain follows the United Arab Emirates in its formal establishemnt of diplomatic ties with Israel. The UAE did so on August 13 following a mediation by the US President Donald Trump. Manama’s intention to normalize relations with Tel Aviv has been previously condemned by various Palestinian factions, including the Palestinian Liberation Organization and Hamas, which saw it as a betrayal of the Palestinian cause.

Iran also slammed the move as did some parts of the Bahraini society and opposition. The Shiite-majority nation is ruled by a Sunni minority that keeps close ties to Saudi Arabia and is wary of Tehran, which it considers a threat to the regional security.

The Israeli delegation is now expected to return back to Tel Aviv while the Americans are scheduled to travel to the UAE on Monday to further advance its relations with Israel. The two nations are expected to sign a deal allowing 28 weekly commercial flights between them on Tuesday.

Only a handful of Muslim countries in the region have recognized Israel since it declared independence in May 1948. Apart from Bahrain and the UAE, only Egypt and Jordan did so in 1979 and 1994, respectively.